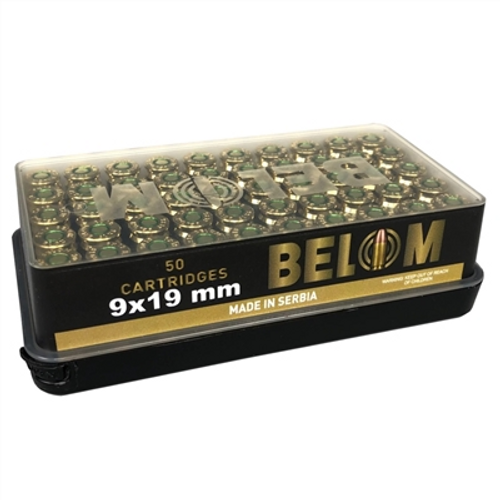 1000 Round Case BELOM 9mm Luger 124 Grain FMJ. Packaged 50 rounds to a box, 1,000 rounds (20 boxes) to a case. Note: these are plastic containers, 50 rounds per container. The containers are carefully packed but may break during shipment. Something about force = mass x acceleration.

"This ammo is almost match grade. Belom is PPU's sister company however I found this ammunition to be superior to PPU. This is consistent shooting bullseye ammo. I used it with a CZ P10c and the CZ loved this ammo. Even after the smoke clears and 9mm is readily available again on the open market , this will be my choice for ammunition." Customer Review

These rounds feature reloadable brass cases, non-corrosive Boxer primers, and full metal jackets with a lead/antimony core will not attract a magnet.

BELOM is an acronym for BEogradska LOvačka MUnicija (Belgrade Hunting Ammunition). BELOM is the military division of Serbia's BORBENI SLOŽENI SISTEMI, the parent company of PPU (Prvi Partizan), one of the oldest, largest and most versatile ammunition manufacturers in Europe. BELOM and PPU are imported to the US by the governmental company Yugoimport SPDR. They have been manufacturing ammunition since 1928.