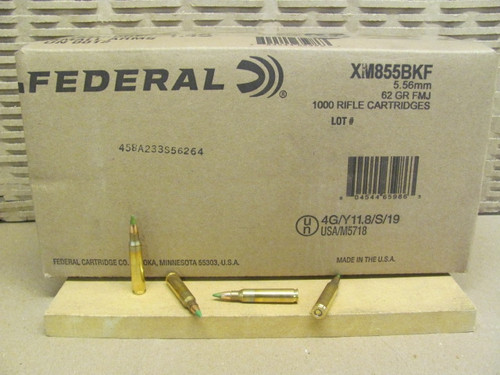 1,000 round case of newly manufactured Federal XM855 62 grain FMJBT cartridges in caliber 5.56 NATO. Federal #XM556BKF. Bulk packaged 1,000 loose rounds in box. These are green-tipped bullets with steel cores and copper jackets, as used by the US Military.

"In all likelihood there is only one assembly line producing this ammunition for Federal Cartridge. When the assembly line is finished making its allotment of ammo for the governmentâs order each week, it runs for awhile longer making some extra for public sale." The Shooter's Log

The difference between 'government sales material' and 'commercial sales material' has to do with performance testing attributes of the cartridges from that lot of ammunition. Ammunition certified for being 'government sales material' is rigorously tested to ensure it meets a mess of government and/or NATO performance specs and is proven to be of the grade of quality and consistency required for military combat use. This is different than the Lake city ammo we are sold in the commercial market which called 'commercial sales material' and is not subjected to the rigorous performance testing and requirements that the government ammo is. Basically its the same sort of stuff, but the Lake City ammo sold in the commercial market here in the USA has not been test proven to be of mil-spec. This is not saying Lake city is inferior, this is saying that it has not been proven to be equal to or better than mil-spec through a rigorous performance testing process, or screened cosmetically either. This is why you get some ugly ammo sometimes with Lake City, or ammo that does perform as consistently with certain lots. Still great ammo for all intents in my opinion, just not top of the like. I do not carry the IMI stuff so I cannot say for sure if it is manufactured, performance tested and certified to mil-spec. I think the bill Clinton deal has to do with ammo that has been sold under contract to the US government eventually being surplus-sold into the commercial market. From time to time you will see older lots real mil-spec Lake city sold as surplus here in the states, but that is stuff that was made for foreign government export contract, then after it 'expired' or no longer is need by that government it was sold to a commercial broker or exporter who sold it back to the US market via one of the US arms/ammunition importers" SGAmmo
×