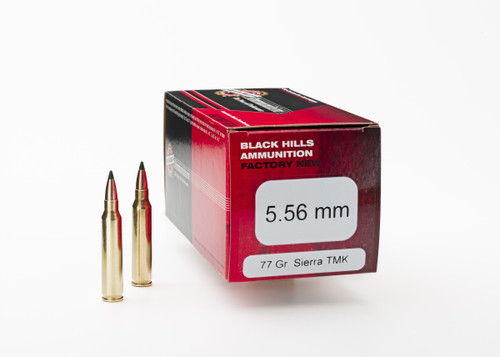 One of the newer offerings from Black Hills! An improved MK262 round with a superior ballistic coefficient.

Black Hills produces factory new rifle ammunition equal to some of the best handloads. It is quickly becoming one of most popular manufacturers of ammunition. Used primarily by all branches of the United State military, this ammunition is also used by competitive shooters and hunters.

"There are two modern schools of thought regarding the selection of the type of projectile to use in a self-defense load; the first preferring a fragmenting, heavy (75-77 grain) OTM type bullet and the second opting for an expanding “blind-to-barriers” bullet. The top performers in the fragmenting, heavy OTM type  category are Hornady’s 5.56mm 75 grain TAP T2,   the Nosler 77 grain Custom Competition and the new Black Hills Ammunition load utilizing the Sierra 77 grain Tipped MatchKing." AR15.com

Black Hills has again expanded its popular line of 5.56mm ammunition. Sierra 77 grain MatchKing bullets set the standard for long range accuracy in .223 and 5.56. World records have been set with those bullets, and MK262 ammunition loaded by Black Hills using MatchKing bullets has provided significantly increased capability to our nation's soldiers, sailors and Marines. Sierra has now further refined this bullet with the addition of a polymer tip which improves upon the external ballistics by significantly increasing ballistic coefficient from .373 to .420. What this means is that the new TMK projectile will be much more resistant to both drag and wind, meaning it will fly flatter and straighter in adverse conditions.The tip also improves terminal ballistics, increasing uniformity of performance and penetration when the projectile arrives on target. This new Tipped MatchKingâ ¢ is now offered as an additional Black Hills 5.56 load.