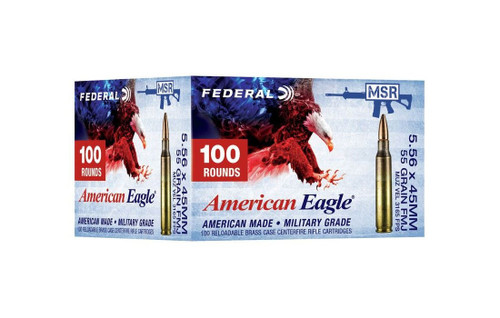 Made in USA! 500 rounds of newly manufactured Federal XM193 55 grain FMJ cartridges in caliber 5.56 NATO. Packaged 100 Rounds per box, 5 boxes per 500 round case. MPN: XM193BLX which is the new product number for XM193BL. Made in USA by Lake City Ammunition Plant. This is the recommended ammunition for use in carbine courses. The box appearance may vary, but it's the same ammunition.

This same ammunition, when available, can be purchased in limited quantities directly from Federal for $0.99/round HERE. We are currently selling it for $0.65/round with no quantity restrictions.

Many rifles chambered in 5.56 NATO are not realizing their full potential when shooting 223 Rem ammo. To get all the performance 5.56 NATO can deliver, you need a 5.56 NATO load. 5.56 NATO chambered rifles were designed to take advantage of the higher pressure of the 5.56 NATO cartridge'shigher pressure translates to increased velocity, higher energy and harder-hitting performance. CAUTION: Firing 5.56 NATO ammunition in 223 Remington chambers will produce a dramatic rise in pressure which increases stress on the weapon, risking wear, permanent damage and/or injury.