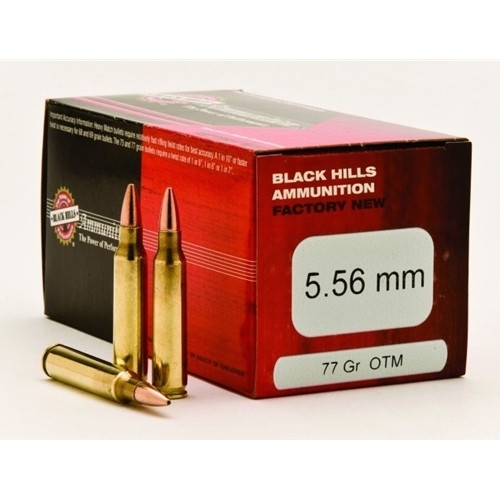 "The 77 grain MK262 ammunition produced by Black Hills Ammunition has been referred to as the most accurate mass-produced 5.56mm ammunition that has ever been type-classified and issued by the US military. Since its inception, genuine MK262 has been manufactured solely by Black Hills Ammunition. For years, MK262 was only available to the civilian population as âcosmetic seconds,â but more recently Black Hills has made first-run production lots available on the commercial market." Molon posting on lightfighter.com

Factory New commercial packed version of the MK262 Mod1 ammunition loaded for the U.S. Military. Some special forces units, particularly in Afghanistan and Iraq, are using Mk262 and Mk262 Mod1 ammo, in response to some issues with M855 terminal performance. There is no difference other than packaging between this cartridge and that supplied to the U.S. Military. Reviewing Black Hills' MK 262 Mod 1 Ammo

David Fortier sits down with Jeff Hoffman of Black Hills Ammunition to discuss the 5.56 load.

Black Hills produces factory new rifle ammunition equal to some of the best handloads. It is quickly becoming one of most popular manufacturers of ammunition. Used primarily by all branches of the United State military, this ammunition is also used by competitive shooters and hunters.


MatchKing rifle bullets are super-accurate bullets with very thin jackets and are held to exacting tolerances in diameter and weight. Their accuracy has been acclaimed worldwide and they have been used to win more target competitions than all target bullets from other manufacturers combined. Each bullet is designed with a very small meplat in order to achieve the highest ballistic coefficient possible. This ammunition is new production, non-corrosive, in boxer primed, reloadable brass cases.

"The round developed a cult following, even packed as cosmetic seconds," Hoffman said. "So last year we started offering it to the public. The only difference is the packaging-it is the exact same ammunition as is delivered to the U.S. military-loaded to the exact same specs. The guy shooting iron sights at beer cans at 100 yards probably has no reason to shoot this, but a man that has the skill and firearm to extend the range, this is his round." Jeff Hoffman from "Reviewing Black Hills' MK 262 Mod 1 Ammo"

"I spoke with a good friend with multiple combat tours in both Iraq and Afghanistan. His experiences as both a Special Forces sniper team leader and assaulter offered a unique perspective on ammo performance. As a sniper, MK 262 was his preferred round (when he was not using 7.62x51mm NATO), and he said simply, âItâs the best, most accurate round the Army has ever issued.â Shooting Times

"The muzzle velocity for the 10-shot string of the Black Hills 5.56mm MK262 Mod 1 ammunition fired from the 20â Colt barrel was 2848 FPS with a standard deviation of 10 FPS and a coefficient of variation of 0.35%!" Molon posting on lightfighter.com