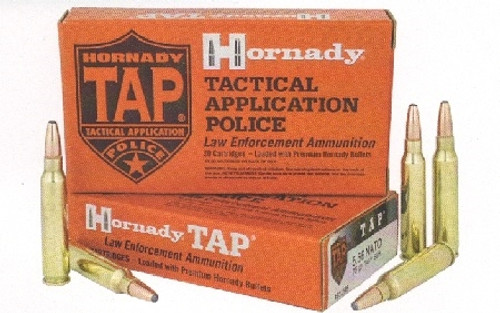 This is the 75 grain TAP® SBR cartridge in caliber 5.56 NATO. Hornady Item No. 81295. Packaged 20 rounds per box, 10 individual boxes in each order. All have identical lot numbers. 2018 production. The new 5.56 TAP SBR meets FBI protocol through all six barriers and is the first load specifically designed for short-barreled rifles.

Specifically designed for short-barreled rifles, Hornady's new 5.56 NATO 75-grain TAP SBR bullet meets FBI protocol and is infused with technology from Critical Duty FlexLock pistol bullets. The TAP SBR utilizes a propellant developed specifically for optimal performance in barrels size 10.5 inches 11.5 inches, and is effective in both suppressed and unsuppressed rifles. Sound signature tests have shown reductions of 6 to 7 decibels compared to other loads, according to the company. In addition, the efficiency of the propellant results in a 15% to 20% temperature reduction, delivering a progressive burn rate.

Range Report by Molon on Lightfighter.net

"Went to a Hornady demo on the terminal ballistics of the Critical Duty and TAPS rounds, Seems the way they described this round is purpose built for SBR so that all the powder burns in the space of the short Barrel, You don't get the flash without a suppressor or the excessive residue in full power load and buildup in suppressors. The build of the round is to also meet FBI protocol. Says its best for 10.5 to 11.5 inch barrels." M4Carbine.net

The TAP® SBR bullet uses the same heavy InterLock® technology used in Critical Duty® FlexLock® to mechanically lock the jacket and core together. In glass, the ogive portion of the bullet shears off at the InterLock® leaving a clean slug to achieve desired penetration.

While similar to the Critical Duty® FlexLockÂ, the 75 gr. SBR bullet does not use Flex Tip® Technology, but does have exposed lead to initiate expansion across all FBI barriers. In all barriers except for glass the bullet expands in a traditional manner creating very large and deep temporary wound cavities.

The FBI protocol for short barreled rifle testing differs from the FBI protocol of handgun testing with the addition of a 7th test. This test consists of shooting an additional round of ammunition into bare gelatin at a distance of 100 yards to determine how the ammunition performs at reduced velocities. TAP® SBR meets FBI protocol in each of the 7 stages of testing. TAPÂ® SBRâ ¢ is designed to work specifically with velocities produced from 10.5-11.5 5.56 NATO 1:7 twist short barreled rifles. TAP® SBR consistently provides 1.5 5 - shot accuracy at 100 yards from 11.5" SBRs.

TAP® SBR utilizes a proprietary propellant and the load is designed specifically for use in 10.5-11.5" short barreled rifles.