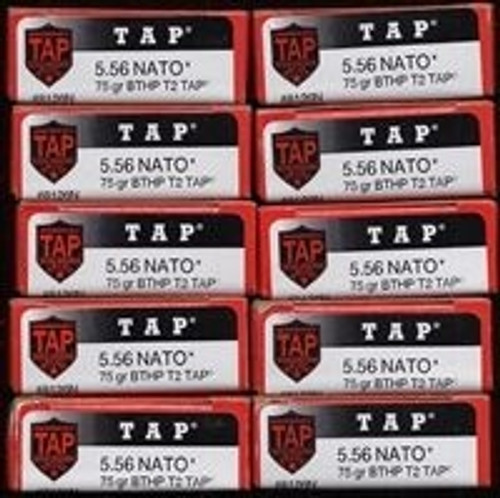 We sometimes carry Hornady TAP SBR, which is specifically designed for short-barreled rifles to meet the FBI protocol for all six barriers.

The T2 bullet profile is specifically designed to enhance function and feeding in M16/M4 variant guns and the cartridge's propellant technology is custom designed to enhance weapon operation, and delivers phenomenal temperature stability. The 75 gr BTHP T2 bullet is designed to deliver rapid incapacitation upon impact. The cases are manufactured to mil-spec hardness and feature staked and sealed primers and sealed case mouths. The T2 bullet is not available from Hornady as a reloading component.

"There are two modern schools of thought regarding the selection of the type of projectile to use in a self-defense load; the first preferring a fragmenting, heavy (75-77 grain) OTM type bullet and the second opting for an expanding “blind-to-barriers” bullet. The top performers in the fragmenting, heavy OTM type  category are Hornady’s 5.56mm 75 grain TAP T2,   the Nosler 77 grain Custom Competition and the new Black Hills Ammunition load utilizing the Sierra 77 grain Tipped MatchKing." AR15.com

The closest military round is the Navy Mk262 Mod0. Both perform well in short barrel rifles (14.5 inches and under) and deliver match accuracy for use by snipers with consistent devastating tissue damage. These are not projectiles for barrier penetration.

Hornady's TAP line of rifle ammunition has become an industry standard for high performance law enforcement ammunition. Their 75 gr. BTHP TAP (Tactical Action Police) round in 5.56mm (.223 Remington) has been shown in numerous tests to be one of the most efficient and effective 5.56mm loadings available for the M-16/AR-15 family of weapons. It has proven effective in roles as divergent as a police patrol rifle ammunition to a close-distance entry round. Its on-target performance would be difficult to improve. Therefore, Hornady's product improvement orientation was to functionality, especially in the increasingly popular M-4 type carbines." PoliceOne.com

"For short barrel rifles (14.5 inches and under) and snipers there is another round to fit the bill of large wound cavities and match grade accuracy. This is the 75 grain Boat Tail Hollow Point Match T2 TAP. Similar to the Navy Mk262 Mod0 round this round delivers match accuracy for use by snipers with consistent devastating tissue damage. This is not a projectile for barrier penetration." Hornady Law Enforcement Ammunition in Small Arms Defense Journal

Speaking of short barrel rifles, Eagle Eye Guns offers a brand new 5.56 TAP round from Hornady that was specifically designed and optimized for short-barreled rifles of 10.5"-11.5": Hornady TAP SBR

75gr T2 TAP is an OTM bullet. The main advantage of using a heavy OTM is precision. A secondary advantage is fragmentation. It is not designed for barrier penetration or expansion. 75gr TAP's main wounding mechanism is violent fragmentation with an extremely early neck length when impacting soft tissue. It will begin to fragment within the first 2", penetrating well into the FBI's recommended 12"-18" ideal penetration depth.

"On unobstructed shots, the 75 gr OTM and Mk318 Mod0 will generally offer similar tissue disruption, however the base of the SOST round will likely exit the suspect while the 75 gr OTM does not." Dr. Gary Roberts

"...what is needed is a environmentally robust, thermally stable combat rifle round with improved terminal performance, yet without the need for the 600+ meter precision accuracy of Mk262 in the Mk12. Such a carbine combat load needs to have a crimped and sealed primer, sealed case mouth, cannelure, acceptable accuracy out to 300-400 meters coupled with good soft tissue terminal performance (early yaw, good fragmentation, at least 12 inches of penetration coupled with maximized tissue damage during the first 10 to 12 inches of travel in tissue. The new Hornady 75 gr milspec OTM (#8126N) loading or equivalent BH milspec 75 gr or Nosler 77 gr OTM loads are examples of this type of combat ammo. Note, the Hornady 75 gr OTM load has a proven combat record in use with certain U.S. SOF units for several years. Also note that an ideal combat load should be relatively blind to intermediate barriers, although at this time, no 5.56 mm loads can fully meet this goal." Dr. Gary Roberts