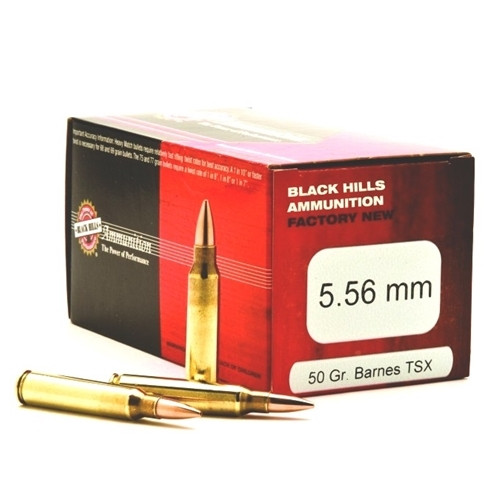 The 5.56 mm BH 50 gr TSX is optimized for ideal penetration and intermediate barrier effects at distances under 250 that are typical for CONUS LE and personal defense use. Loaded with Triple-Shocks, these revolutionary bullets from Barnes are made of 100% copper and contain no lead. When the bullet expands, four razor-sharp cutting petals are created, allowing the bullet to penetrate farther through tough bone and tissue. Triple-Shock bullets usually retain 100% of their original weight, making them a superb choice for hunting. This ammunition is new production, non-corrosive, in boxer primed, reloadable brass cases. This is an outstanding cartridge for short-barreled AR15s and for barrier penetration.

In the past we have also offered two other outstanding duty cartridges in 5.56 NATO that are very effective against barriers as well as good for short barreled rifles. However, the Federal Tactical XM556SBCT3 is no longer produced and the Winchester Ranger 556B has been impossible to source:
Federal Tactical Bonded XM556SBCT3 62 grain JSP
Winchester Ranger 556B 64 grain JSP

For LE and CONUS defensive use, the 50 gr TSX is hard to beat. Dr. Gary Roberts

"...the Black Hills 5.56mm 50 grain TSX load fired from a 10.5â barrel produces nearly the same results in bare ballistic gelatin as the load does when fired from a 20â barrel." Molon posting on Lightfighter

One of the nice things about this load is that it works very well in barrels from 8-20 inches long and works in twists from 1/12 to 1/7. Dr. Gary Roberts

This load performs particularly well in shorter barreled carbines, because it is designed to expand, not fragment.

"The specific 5.56mm 50gr TSX bullet that we use is a tougher bullet originally designed for terminal performance parameters that included barrier performance for LE use. It is optimized for gunfight distances likely to be encountered by LE. From a 20" barrel you can expect good expansion to around 200 yards." Jeff Hoffman, Black Hills Ammunition

"With these bullets there is a 1000-1200 fps "window" for best performance. The "window" is to mushroom at low velocity and not lose petals at the higher velocity. The window can be adjusted to match the velocity range that is important for the intended purpose. That is what was done with this particular bullet (the 50 TSX we use in our 5.56mm load). It works great in short and long M4/AR15 barrels at very short range, and still performs well at the outside edge of most LE or civilian engagement distances, plus performs well through many barriers. The advantage to this "tougher" version is that it does not lose petals at the very close ranges. The "standard" bullet may perform better at somewhat longer ranges, but at the possible expense of performance at short ranges where the velocity is still high enough to cause petals to shear." Jeff Hoffman, Black Hills Ammunition

The TSX was introduced in 2003 and has become Barnesâ most popular hunting bullet. The TSX has gained worldwide recognition as one of the deadliest, most dependable bullets you can buy. Try these all-copper bullets and realize the added benefits of improved accuracy, reduced barrel fouling and increased velocity. Barnes TSX

This load features the solid copper 50 gr. Barnes TSX bullet as modified by BH. This bullet offers tremendous performance against barriers such as auto glass and sheet metal. As it is solid in construction, there is no jacket to separate from its core, as with traditional bullets. The bullet stays intact after passing through intermediate barriers.

The TSX bullet design as modified by BH has a more robust design, making it almost totally barrier blind. Its thicker petals makes it less likely to lose petals when penetrating auto glass or other intermediate barriers. And it gives excellent expansion and deep penetration from almost any barrel length from 20 inches down to eight inches. The only downside to the tougher design is expansion drops off dramatically past 75 yards from an eight inch barrel out to 200 yards from a 16 inch barrel.

"The new design of the proprietary 50 grain TSX, combined with the increased velocity of the 5.56mm load (along with the relatively shorter length of the 50 grain projectile) allows this load to be adequately stabilized from a wide variety of barrel twist rates and produce extremely consistent terminal ballistic properties from a wide variety of barrel lengths. The pic below (from Black Hills Ammunition) shows that the Black Hills 5.56mm 50 grain TSX load fired from a 10.5â barrel produces nearly the same results in bare ballistic gelatin as the load does when fired from a 20â barrel." Molon posting on lightfighter.com