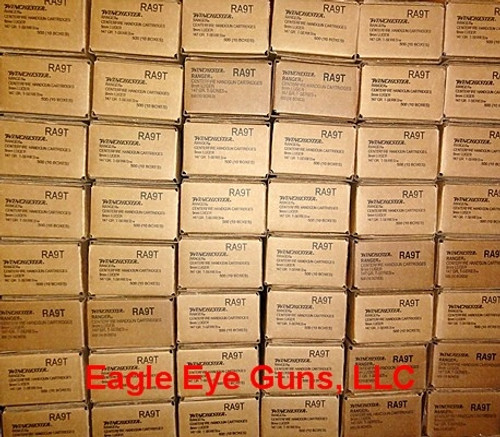 This is arguably the best and certainly the most difficult to find 9mm self defense round. The ammunition in packaged in a factory sealed case of ten black Winchester T-Series Enhanced 50 round boxes as pictured. This ammunition was manufactured in 2021 - 2022 at Winchester's new plant in Oxford, MS.

This is the modern day evolution of Winchester's Black Talon cartridge. If 500 rounds is too many, we often sell 250 rounds and 50 round boxes.

This cartridge is on Dr. Gary Roberts' list of loads that demonstrate outstanding terminal performance and can be considered acceptable for duty/self-defense use. 9mm Self Defense and Duty Loads

While you're at it, order some of the recommended practice round for Ranger RA9T 147 Gr. Hollow Points: Speer Lawman 9mm Luger 147gr FMJ 53620 or Federal American Eagle 9mm 147gr FMJ AE9AP

"RA9T works well and is quite similar to the HST, but with a bit less expansion and barrier ability." Dr. Gary Roberts

"Winchester Ranger Talon had been used around here for over a decade with superb OIS incident results. Unfortunately, in 2008, Winchester was unable to deliver the quantity of ammo needed in the required time frame; the Federal HST met the bid requirements and was immediately available." Dr. Gary Roberts

"At a Winchester ammo seminar earlier this year, I expressly asked the assembled execs if they had ever heard of a case where an armed citizen's choice of their LEO/Ranger ammo had been used against them in court, and they replied that they had not." Massad Ayoob posting on "The High Road"