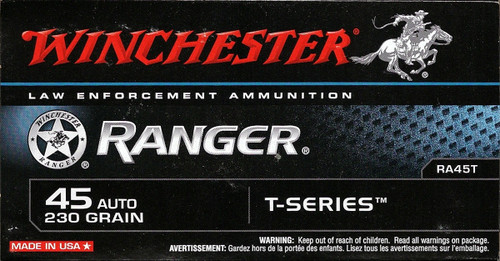 Winchester Ranger T RA45T 45 ACP 230gr Law Enforcement. When a situation unfolds, so does the Ranger® T-Series handgun ammunition. With an unbeatable combination of expansion and penetration enhanced by engineered segments in the patented SXT® design, the T Series can be relied on to deliver consistent stopping power in real world situations. Backed by a comprehensive testing and training program, Winchester T Series is ammunition that always performs at its best even when things are at their worst.

This is arguably one of the best and the most difficult to find 45 ACP self defense rounds. These cases of 500 rounds contain the newly-redesigned black Winchester T-Series Enhanced boxes as pictured. This ammunition was manufactured within the past year at Winchester's new plant in Oxford, Mississippi.

This is the modern day evolution of Winchester's Black Talon cartridge.

"Bullet designs like the Silver Tip, Hydra-Shok, and Black Talon were state of the art 15 or 20 years ago. These older bullets tend to plug up and act like FMJ projectiles when shot through heavy clothing; they also often have significant degradation in terminal performance after first passing through intermediate barriers. Modern ammunition which has been designed for robust expansion against clothing and intermediate barriers is significantly superior to the older designs. The bullets in the Federal Classic and Hydra-Shok line are outperformed by other ATK products such as the Federal Tactical and HST, as well as the Speer Gold Dot; likewise Winchester Ranger Talons are far superior to the old Black Talons or civilian SXT's." Dr. Gary Roberts