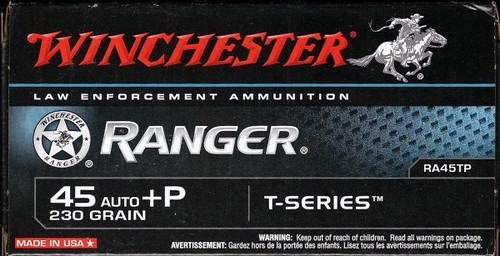 If out of stock, consider this popular 230 grain P JHP law enforcement round: RA45T

Winchester Ranger T-Series RA45TP 45 ACP 230gr +P Law Enforcement Ammunition. When a situation unfolds, so does the RangerÂ® T Series handgun ammunition. With an unbeatable combination of expansion and penetration enhanced by engineered segments in the patented SXTÂ® design, the T Series can be relied on to deliver consistent stopping power in real world situations. Backed by a comprehensive testing and training program, Winchester T Series is ammunition that always performs at its bestâeven when things are at their worst

$0.70/cartridge for arguably one of the best and the most difficult to find 45 ACP self defense rounds. Winchester goes to great lengths to keep it out of the hands of the public. Further contributing to its scarcity, is that it is only produced once in a while. 500 rounds contained in 10 of the black Winchester T-Series Enhanced 50 round boxes as pictured. This ammunition was made in East Alton, IL or Winchester's new plant in Oxford, MS.

"Winchester Ranger T continues to be plagued by failures to expand through 4-layer denim. This is due to the cutter used to score the bullets to allow the copper jacket to tear and expand with the lead dulling, thus not cutting the scores deep enough.

Oddly enough, the Ranger T-series +P is confirmed to not have this issue. The extra velocity from the added 100 FPS is enough that it expands reliably regardless of intermediate barriers.

At this time, if you choose to go with Ranger over HST or other quality rounds on Doctor Roberts' list (which is also stickied here on this forum, and updated with Doc's permission), I highly recommend the +P over the standard pressure for the simple fact that it expands reliably where the standard pressure does not.

I will also point out that the Ranger +P load at 950 FPS has very minimal increase in recoil, pressure, etc. I find little enough that I notice no difference in switching between the two types of loads." 1911Forum.com: RA45T, or HST 230gr, which is the Best

"Bullet designs like the Silver Tip, Hydra-Shok, and Black Talon were state of the art 15 or 20 years ago. These older bullets tend to plug up and act like FMJ projectiles when shot through heavy clothing; they also often have significant degradation in terminal performance after first passing through intermediate barriers. Modern ammunition which has been designed for robust expansion against clothing and intermediate barriers is significantly superior to the older designs. The bullets in the Federal Classic and Hydra-Shok line are outperformed by other ATK products such as the Federal Tactical and HST, as well as the Speer Gold Dot; likewise Winchester Ranger Talons are far superior to the old Black Talons or civilian SXT's." Dr. Gary Roberts