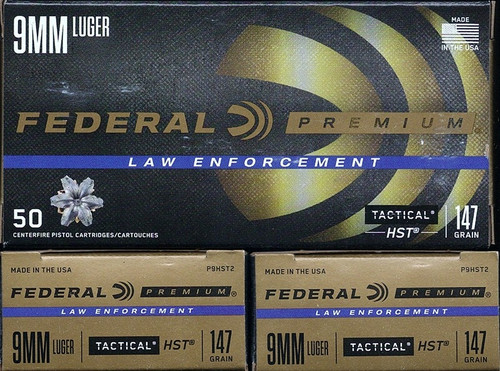 This cartridge and a modified version of the Speer G2 have been chosen by the FBI as their duty rounds of the future. The G2 cartridge was modified to allow for better expansion and the HST cartridge was recently modified to optimize barrier penetration.

While you're here, pick up some of the recommended practice round for Federal Tactical HST 9mm 147gr Hollow Points: Federal American Eagle AE9FP.

"The IWBA published some of Gene Wolbergâs material from his study of San Diego PD officer involved shootings that compared bullet performance in calibrated 10% ordnance gelatin with the autopsy results using the same ammunition. When I last spoke with Mr. Wolberg in May of 2000, he had collected data on nearly 150 OIS incidents which showed the majority of the 9mm 147 gr bullets fired by officers had penetrated 13 to 15 inches and expanded between 0.60 to 0.62 inches in both human tissue and 10% ordnance gelatin. Several other agencies with strong, scientifically based ammunition terminal performance testing programs have conducted similar reviews of their shooting incidents with much the same results--there is an extremely strong correlation between properly conducted and interpreted 10% ordnance gelatin laboratory studies and the physiological effects of projectiles in actual shooting incidents."

"Perhaps the documented success of the 9mm 147 gr JHP in California is a result of differing laws of physics on the West Coast than in other areas. Unfortunately, that conjecture does not stand up to scrutiny as the extensive Royal Canadian Mounted Police studies determined that the 9mm 147 gr JHP was the most effective load for the caliber. In addition, during the ammunition trials for the U.S. Military M11 pistol conducted by Navy Weapons Center Crane Indiana, the 9mm 147gr JHP was selected as the issue load for the M11, beating a variety of other 9mm JHP loads, including both standard pressure and +P pressure 115 gr and 124 gr JHPâs. Not to mention the FBI has consistently selected 9 mm 147 gr JHP's for issue to their personnel who are running 9 mm."

FWIW, many of the largest west coast LE agencies have been using 147 gr for two decades without any issues, same with the FBI... Dr. Gary Roberts

The FBI currently issues a 147 gr and previously issued 147 gr going back the last quarter century or so, as noted above... Dr. Gary Roberts

"My PD issues the 147 HST load, and we have had very good luck with it. One officer involved shooting had one round penetrate a car door, partially through the seat and into the bad guy, fatally." M4Carbine.net