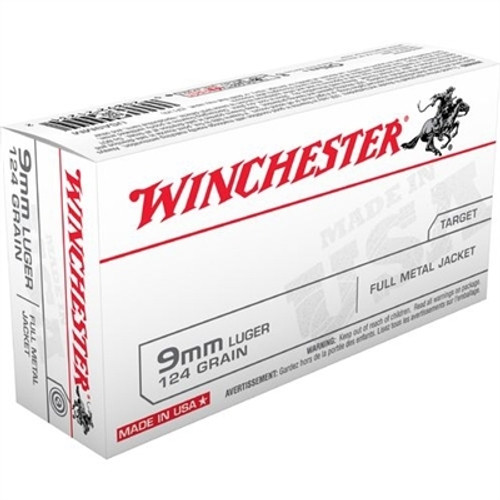 New production US Military 9mm Luger handgun ammunition manufactured by Winchester. This ammunition is known to be extremely reliable and consistent. Loaded to NATO specifications and marked with the NATO cross, Q4318 is the same ammunition is currently being shipped to American soldiers overseas as M882.

This is also the round used by DHS officers for their yearly qualification with their weapon.

This 9mm NATO ammunition is loaded to the same specifications currently used by our U.S. Military. The higher pressure in these rounds deliver increased velocity and energy over standard 9mm ammunition, which also promotes reliable cycling in modern 9mm semi-auto handguns as well as carbines. Ideal ammo for Glocks and submachine guns. In fact, the Glock 17 was designed to shoot this cartridge.

Winchester Q4318 9mm NATO is essentially the same round as Ranger RA9124N. The only differences are in the quality control, the packaging, and the price and availability: Streicher's RA9124N

Notice: Use only in modern 9mm firearms in good condition. These Cartridges are loaded to military velocity and pressure which is higher than 9mm Luger cartridges. The average pressure is 10% higher than the industry standard pressure for 9mm Luger. This could be considered a mild +P round but not a +P+ round.