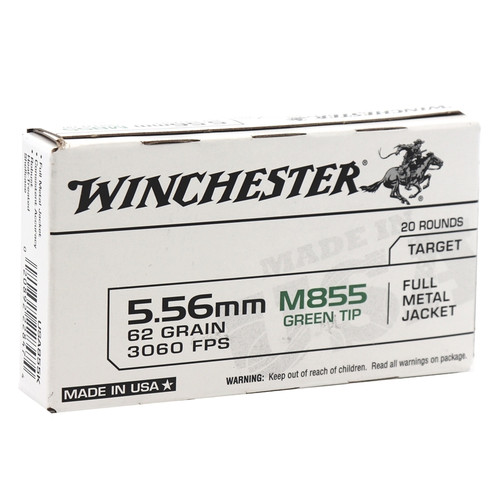 These are green-tipped bullets with steel cores and copper jackets, coming off the same production line that produces ammunition used by the US Military. Exact same ammunition as Federal XM855 with case heads marked LC 2020 with the NATO star. The US made M855 is painted with a green tip in order to distinguish it from M193. M855 is a standard cartridge for NATO forces as well as many non-NATO countries. It was developed as the primary ammunition for the 20 inch barrels of the M16A2 rifle and the M249 SAW. It is effective against personnel and light materials, not vehicles. The US Military now uses the M855A1 cartridge.

In February 2015, the BATFE under Obama proposed banning M855 ammunition, a variety of the second most popular caliber used in the nation's most popular rifle. At the time, Obamaâs White House spokesman said that banning M855 would be a âcommon sense stepâ about which âeveryone should agree,â and the move was strongly supported by the media. Luckily, gun owners spoke up and stopped the implementation of this ban. However the episode serves as a warning of what could occur under a Biden administration without the need for a new law passed by Congress.

This is military style ammunition for your military style AR-15. This ammunition is for use only for chambers marked 5.56 NATO, as are most AR-15 carbines and rifles. Do not use it in sporting rifle chambers marked .223. M855 (M16A2) cartridge is best used with a rifling twist rate of 1:7 or 1:9. When the M855 is fired in a rifle with a slower rate of twist the longer 62-grain bullet can yaw up to 70 degrees in free trajectory through the air, substantially degrading accuracy.
×