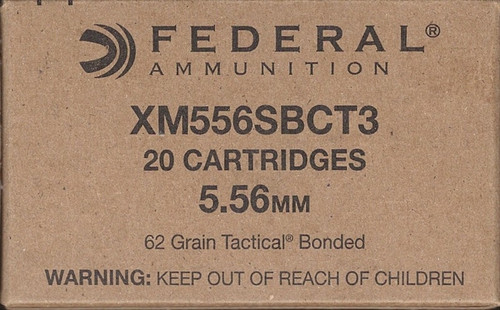 This cartridge is out of production. We may carry the alternative which is the 5.56 softpoint barrier round used by the FBI:  Winchester Ranger 556B

XM556SBCT3 utilizes the same T3 bullet as XM556FBIT3 with a propellant developed specifically for optimal performance for the 11.5" short barreled rifles used by the FBI HRT teams. It comes fresh to us from the manufacturer through an intermediary. This is the real deal. Unlike some examples of XM556FBIT3M, it is not labeled as a "second" by the manufacturer because it failed the FBI's accuracy requirements. Nor is it the "reclassified" ammunition (RXM556T3), which appears to be contract seconds/rejects for XM56SBCT3.

The round is known for its reliability, and ability to defeat tough barriers with minimal deviation while maintaining accuracy and terminal performance.

"The FBI has completed their testing process and awarded a 5.56 mm ammunition contract for up to $97 million dollars. This award is now public information and appears unique in several ways. Besides being perhaps the largest ammunition contract in FBI history, it is also the first time the FBI has mandated a true 5.56 mm pressure loading, rather than the typical anemic .223 pressure loadings that have generally been marketed to LE agencies. The 5.56 mm load offers approximately an extra 200 fps--helping performance out of short barrel weapons and enhancing function when rifles are dirty or in dusty conditions. The new FBI contract also required that the ammunition be packaged on stripper clips to aid in more rapid loading of magazines. Finally, it is the first multi-award carbine ammo contract for the FBI--both Federal Cartridge and Winchester were judged to offer ammunition which met the contract criteria. Numerous other Federal LE agencies are authorized to purchase off this contract.

Both of these loads are the best barrier blind 5.56 mm loads ever produced for LE use; they offer outstanding terminal performance, even after first defeating intermediate barriers like vehicle windshields." DocGKR 2010
Many rifles chambered in 5.56 NATO are not realizing their full potential when shooting 223 Rem ammo. To get all the performance 5.56 NATO can deliver, you need a 5.56 NATO load. 5.56 NATO chambered rifles were designed to take advantage of the higher pressure of the 5.56 NATO cartridge â higher pressure translates to increased velocity, higher energy and harder-hitting performance. CAUTION: Firing 5.56 NATO ammunition in 223 Remington chambers will produce a dramatic rise in pressure which increases stress on the weapon, risking wear, permanent damage and/or injury. NOTE: NOT for use in 223 REM chambered guns!

Federal LE223T3 is essentially the law enforcement .223 version of this round. If your chamber is .223 rather than 5.56, this is for you. The LE223T3 gets more QA/QC, clear primer sealant vs. blue, and nickel plated rather than brass cases.

'From what I understand the original law enforcement designation (government contract number) was XM556FBIT3 for the FBI. Then the number XM556SBCT3 appeared that was either the new/current contract number or the civilian number for the same round. More recently, the number RXM556T3 appeared which seems to be contract rejects/seconds for the XM556SBCT3 number. My understanding is RXM556T3 represents production lots that didn't meet the contract specs, but otherwise fit for use." bullpupforum

"The performance of the FBIT3 shows that it is one of the best choices for defensive ammo on the market today. The round gave us a similar performance against three different tests. In bare gel the ammo did an outstanding job of penetrating and transferring energy. When faced with barriers the FBIT3 continued to impress. With most ammunition the introduction of barriers results in a complete failure of the projectile. The FBIT3 saw a minimal loss in performance. The round loss roughly two inches of penetration, but was able to maintain similar expansion and cavitation. Overall the FBIT3 has proven to be a reliable defensive load." Defensivecarry.com
×

VERY DIFFICULT TO FIND AND NO LIMITS! FEDERAL LE223T1 55 grain JSP This is .223 Federal LE Tactical

VERY DIFFICULT TO FIND AND NO LIMITS! FEDERAL LE223T1 55 grain JSP This is .223 Federal LE Tactical