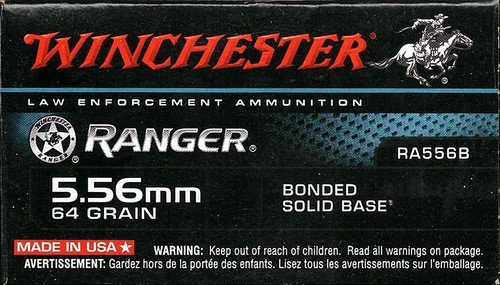 "The FBI has completed their testing process and awarded a 5.56 mm ammunition contract for up to $97 million dollars. This award is now public information and appears unique in several ways. Besides being perhaps the largest ammunition contract in FBI history, it is also the first time the FBI has mandated a true 5.56 mm pressure loading, rather than the typical anemic .223 pressure loadings that have generally been marketed to LE agencies. The 5.56 mm load offers approximately an extra 200 fps--helping performance out of short barrel weapons and enhancing function when rifles are dirty or in dusty conditions. The new FBI contract also required that the ammunition be packaged on stripper clips to aid in more rapid loading of magazines. Finally, it is the first multi-award carbine ammo contract for the FBI--both Federal Cartridge and Winchester were judged to offer ammunition which met the contract criteria. Numerous other Federal LE agencies are authorized to purchase off this contract.

Both of these loads are the best barrier blind 5.56 mm loads ever produced for LE use; they offer outstanding terminal performance, even after first defeating intermediate barriers like vehicle windshields." DocGKR

"The Winchester RA556B load is topped with the Nosler 64 grain Bonded Solid Base projectile. This bullet has a copper base that comprises almost one-third of the length of the projectile. Obviously, the lead core is bonded to the copper jacket. The bullet has a cannelure and a âProtected Pointâ design for reliable feeding in AR-15s" Molon on Lightfighter.net