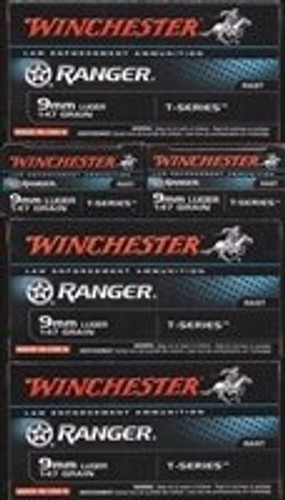 This is arguably the best and the most difficult to find 9mm self defense round. The ammunition in packaged in five black Winchester T-Series Enhanced 50 round boxes as pictured. This ammunition was manufactured in the past year at Winchester's new plant in Oxford, MS.

This is top of the line, American-made ammo - it doesn't get any better than this for personal protection. Designed for Law Enforcement and occasionally made available to the general public through police trade-ins.

This is the modern day evolution of Winchester's Black Talon cartridge.

While you're here, pick up some practice rounds for your RA9T: Federal AE9FP

This cartridge is on Dr. Gary Roberts' list of loads that demonstrate outstanding terminal performance and can be considered acceptable for duty/self-defense use. 9mm Self Defense and Duty Loads

"RA9T works well and is quite similar to the HST, but with a bit less expansion and barrier ability." Dr. Gary Roberts

"Winchester Ranger Talon had been used around here for over a decade with superb OIS incident results. Unfortunately, in 2008, Winchester was unable to deliver the quantity of ammo needed in the required time frame; the Federal HST met the bid requirements and was immediately available." Dr. Gary Roberts

"At a Winchester ammo seminar earlier this year, I expressly asked the assembled execs if they had ever heard of a case where an armed citizen's choice of their LEO/Ranger ammo had been used against them in court, and they replied that they had not." Massad Ayoob posting on "The High Road"